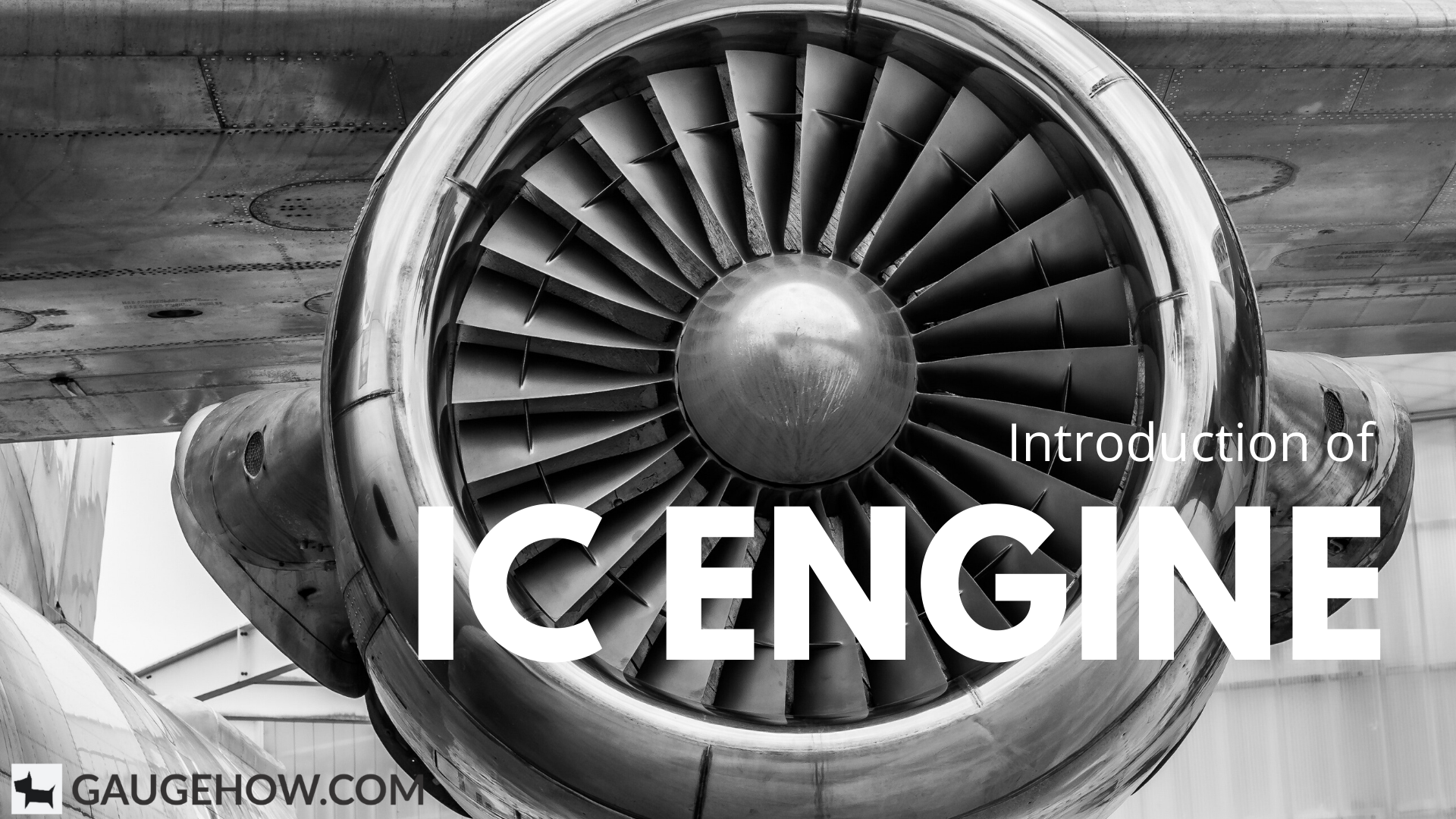 An internal combustion engine is an engine in which ignition and combustion of fuel take place inside the engine. It works on the principle that the charge is ignited inside a combustion chamber under very high pressure.

In primitive times, man’s muscles were the primary source of power for work. Then, animals were trained and their power was utilized to perform certain works. Afterward, energy conversion from one form to another was introduced, using a machine called ‘engine’.

I.C.Engine, an acronym for an internal combustion engine is the engine in which ignition and combustion of fuel take place inside the engine. It works on the principle that the charge is ignited inside a combustion chamber under very high pressure.

A diesel engine is an example of it where the working fluid is air. This engine is widely applied in automotive, aviation, power generation, etc.  The engine consists of various components viz. cylinder, spark plug, valves, piston, piston rings, connecting rod, crankshaft, and oil pan(sump).

(On the basis of types of ignition) : a spark-ignition gasoline engine and compression ignition diesel engine. In the spark-ignition engine, the fuel is mixed with air and introduced into the cylinder during the intake process.

As the piston compresses the mixture, there ignites a spark that led to the combustion process. during the power stroke, combustion gases expand and push the piston. Whereas, in the diesel engine, only air is introduced and then compressed. Afterward, the engine sprays the fuel into the hot compressed air which causes the ignition.

(On the basis of the number of strokes): two-stroke engine and four-stroke engine. Most of the engine uses the four-stroke engine, that means four piston strokes are required to complete a cycle. This cycle includes four processes: intake, compression, combustion and power stroke and exhaust.

Various advancements are done nowadays like advancements in the design of the engine, fuel injection, materials to be used, etc to improve the fuel efficiency, less weight of the vehicle, less pollution, and lower emission.

The internal combustion engine is having a widely diverse classification on the basis of different criteria.

Following are the major criteria and their subdivisions on which an IC Engine is classified:

1. NUMBER OF STROKES PER CYCLE:

This engine makes four piston strokes i.e. intake, compression, power and exhaust to complete an operating cycle. The operating cycle requires two crankshaft revolutions( 720 degrees). It is the most common type of engine used in automotive.

As per the name, this engine requires two piston strokes to complete an operating cycle. Those strokes are compression and expansion strokes. Only one crankshaft rotation is required.

This engine is introduced to make some advancements in conventional two-stroke and four-stroke engines. It increases the efficiency of fuel, reduces emissions, etc. In this engine, one of the cylinders makes two strokes and others makes four strokes, in total making six strokes per cycle.

Otto cycle is an idealized cycle for SI engines.

It consists of two quasistatic and isentropic processes and two isochoric processes. The engine which follows this thermodynamic cycle for operation is known as otto cycle engine.

Diesel cycle is an idealized cycle for a diesel engine which consists of two isentropic processes, one isobaric and one isochoric process.

Dual cycle or mixed cycle or limited pressure cycle is the combination of otto and diesel cycle. Heat addition is partially through constant volume and constant pressure process. The internal combustion engine which follows this cycle is called, dual cycle engine.

A) PETROL OR GASOLINE ENGINE

This engine generates power by burning gasoline (or other volatile liquid fuel with similar properties) ignited by an electric spark. Generally, a mixture of fuel and air is used as a charge.

This engine makes use of diesel as fuel, where fuel ignition takes place on its own, without any spark. Hence, compression of the inlet air mixture takes place and then fuel is injected.

This engine is a more advanced version of the otto engine. This engine can run on either natural gas or gasoline which means it follows the natural gas system and gasoline system i.e dual fuelling system. Hence these kinds of engines are known as bi-fuel or dual-fuel engines.

in S.I engines, the ignition takes place with the help of a spark plug. This mechanical device called spark plug ignites a mixture of air and fuel( charge)  which is compressed and combusted in the combustion chamber.

A CI engine follows the auto-ignition or self-ignition process where fuel charge is ignited by its own heat of compression. Here, the air is inducted into the combustion chamber and compressed to extremely high pressure. Hence the compression ratio of this engine is high(up to 22).

It is a basic piston-cylinder configuration of an engine in which only one engine cylinder is used. The designing of this engine is compact and simple.

Here, more than one cylinder system is used. It is used to provide a more continuous flow of power. A popular multi-cylinder engine contains four, six, and eight engines in various configurations.

These engines have the cylinders configured in two banks on either side of a single crankshaft. Which means they share a common crankshaft. The other names for this cylinder are Flat engines or “boxer” engines.

The vertical engine is the engine in which the movement of the piston is vertical viz. vertically up and down and the placement of the crankshaft is below the cylinder.

In this engine design, cylinders are placed at some angle. Due to the presence of angle in between, it forms a “v- shape”. This angle varies from 60 degrees to 90 degrees. Usually, even numbers of cylinders are used in this design. These are used in high-end sports bikes, high-end cars, etc.

This is a reciprocating type IC engine. The configuration is like “wheel and spokes” in which cylinders are placed outward from the central crankcase. It resembles a star, hence called a “star engine”.

In this engine, cylinders are placed in a straight line, hence it is also called “straight engine”. These engines can have 2,3,4,5,6, or up to 8 cylinders. This engine design is conventional and quite basic.

When two V engines are joined by a single crankshaft, we will get an X engine. Thus, this engine is made from two V engines. This engine has its own historical Significance as They were used in aircraft during the Second World War.

In this engine, pairs of pistons are co-axial which share a single combustion chamber. The cylinder head is absent and the cylinder has its piston at its both ends.

Like V engine, W engine resembles its name, i.e.like letter W when viewed from the front. W engine is a type engine where more than one (generally three or four) cylinder banks are used with the common crankshaft.

This type of cooling engine depends on the amount of airflow across their external engine surface to eliminate the heat dissipation. We make thin cooling fins to increase the surface area.

When water is used as a coolant in an internal combustion engine, then it is called the water-cooled engine. This cooling system works on the passing of water (as coolant) through provided passages in engine blocks. We make water jackets, water pumps, etc for this engine.

It is another liquid-based cooling system engine where engine oil acts as a coolant to reduce the heat dissipation. We make use of the radiator (oil cooler) for this purpose where hot oil, after cooling the engine, is passed through the heat exchanger.

2 thoughts on “What is IC Engine? and It’s type”